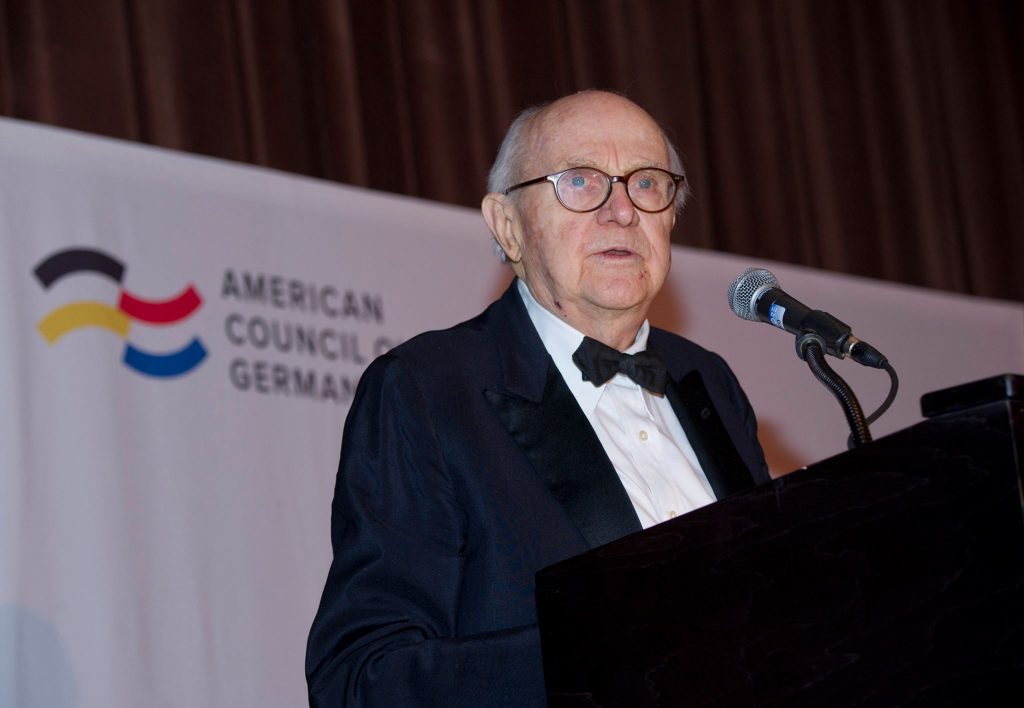 It is with deep sadness that the American Council on Germany announces the passing of ACG Vice Chairman Dr. Richard M. Hunt, the longest-serving President of the ACG and longtime Marshal at Harvard University, who was a driving force and an ardent supporter of the Council for 50 years. His dogged dedication to the ACG’s mission, his wise counsel, his keen knowledge of German-American relations, his faith in younger generations, and his warm, unassuming manner will be sorely missed.

Rick Hunt was deeply committed to strengthening ties, building trust, and fostering mutual understanding between Germany and the United States. He gave exceptional support to the American Council on Germany, including through the Roy M. Hunt Foundation, named after his father, who had served as Alcoa President for 30 years. Rick Hunt was President of the ACG from 1972 to 1988 and served as Vice Chairman since then.

In 1969-1970, ACG founder Christopher Emmet, then acting as the unpaid executive of the ACG, received a fateful phone call from Shepard Stone, who was working under McGeorge Bundy at the Ford Foundation. Shepard Stone asked Christopher Emmet to meet with a gentleman who taught German history at Harvard. He wanted to appoint Rick Hunt to act as Ford’s liaison to the ACG, where the foundation was considering two grants, for the Biennial Conferences and the Young Leaders program. The meeting went well, and Rick Hunt came onto the ACG Board shortly thereafter – the beginning of a half-century wonderful and fruitful relationship.

During his tenure, Rick Hunt was instrumental in the creation of the American-German Young Leaders program, which was launched in 1973, and the McCloy Fellowship program, which was launched in 1975 – both of which remain central to the Council’s work today. Rick personally participated in more than two dozen Young Leaders Conferences. He also helped shape the Biennial German-American Conferences. In addition, he was responsible for setting up the permanent office of the ACG and getting its first fundraising efforts off the ground. He strongly believed in sustaining ties with our sister organization, Atlantik-Brücke.

Rick Hunt was decorated by German Federal President Walter Scheel in 1977 “in recognition of the outstanding contributions of Dr. Hunt as President of the ACG towards fostering and developing the existing excellent relations between the U.S. and the Federal Republic of Germany, as well as for his work in the field of student exchange between both countries … .”

Over the years, Rick Hunt was an inspiration and a guide not only to the ACG but also to many rising stars in academia. In 2003, the ACG initiated the Dr. Richard M. Hunt Fellowship for the Study of German Politics, Society, and Culture to allow young American scholars to travel to Germany for up to 28 days to conduct research. The Selection Committee for this fellowship is made up of former students of Rick’s, all of whom are exceptional Young Leader alumni.

More recently, Rick was concerned about a breakdown in trust across the Atlantic. He was eager to find ways to shore up the relationship now and for generations to come.

For his Herculean efforts, Rick Hunt was honored with a Lifetime Achievement Award at the ACG’s 2016 McCloy Awards Dinner. In accepting the award, he predicted that “the American Council will continue to grow stronger in the years ahead and we will continue to create new programs between our country and Germany. After all, this prediction is based on the dream of America’s continuing reconciliation with one of the great nations in Europe, indeed in the world. I will predict that this is a dream that will never die.”

Rick lives on in the hearts of all of us at the ACG; his commitment and legacy will never die. He is survived by his wife, Priscilla; twin daughters, Susan Hunt Hollingsworth and Helen Hunt Bouscaren; a son, Bill; and loving grandchildren.

Posted on April 15, 2020 by Robin Cammarota in News0 comments