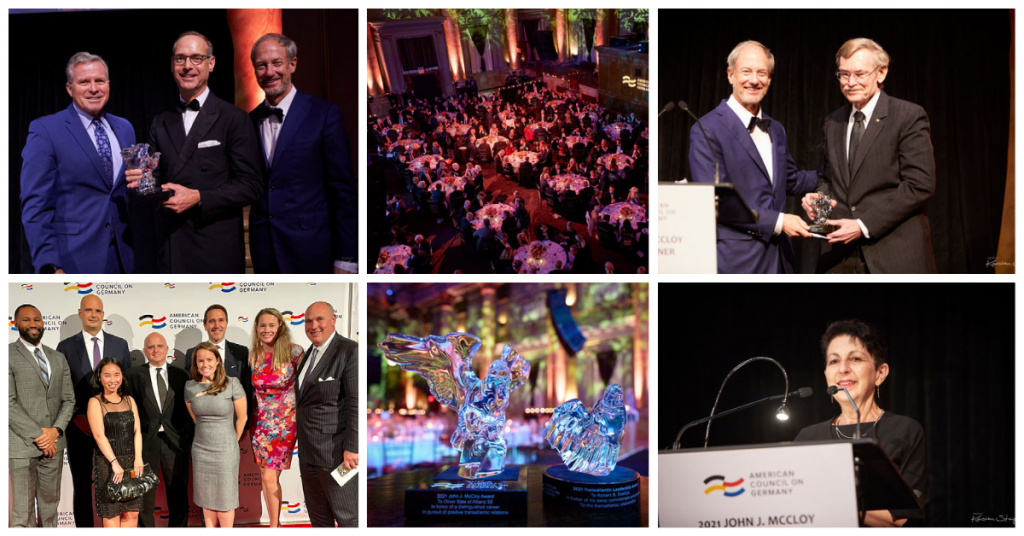 The American Council on Germany honored Oliver Bäte, Chairman of the Board of Management of Allianz SE, and Robert B. Zoellick, Lead U.S. Official for the Two‐Plus‐Four Negotiations on German Unification and former President of the World Bank, at its 28th John J. McCloy Awards Dinner on October 13, 2021, in New York City. The McCloy Awards Dinner brings together thought leaders, decision-makers, and stakeholders to celebrate the German-American partnership. The dinner was the first major in-person event for the ACG since the COVID-19 pandemic hit New York in March 2020.

As emcee of the evening, ACG Chairman Ambassador John B. Emerson reminded the more than 320 attendees – all of whom were vaccinated against COVID-19 – how crucial German-American cooperation is in addressing global challenges. He also underlined the accomplishments of the evening’s honorees: “Both of our honorees have demonstrated an adept understanding of the past, a strong sense of the challenges facing us today, and a vision for the future. Throughout their careers they have shown their resilience and their ability to consistently navigate complex challenges. … Both of them have recognized that the German-American relationship is indispensable – and as steadfast transatlanticists have been advocates for finding ways to strengthen ties across the Atlantic.” Ambassador Emerson also read a letter from President Joe Biden, who affirmed the United States’ and Germany’s commitment to democratic principles and said our biggest challenges are best faced in tandem with each other: “We cannot tackle these issues alone; they require global cooperation, and organizations like the American Council on Germany remind us of the importance of uniting around these shared values. Your work truly deepens the bonds between our two nations and bolsters transatlantic ties.”

German Consul General in New York David Gill (1992 Young Leader) said that whatever the outcome of the coalition negotiations following the recent federal elections in Germany, “whoever will form the next government, one matter is very clear: My country and its government will keep the transatlantic relationship high on the agenda and will keep close contact on all levels with our most important ally beyond Europe.” Consul General Gill also conveyed greetings from Chancellor Angela Merkel, whose letter stated that “Our societal, economic, and political ties are so close that we could not imagine a better partner for each other. Our transatlantic community manifests itself in the most diverse and lively manner – also thanks to the American Council on Germany.”

Former journalist Deidre Berger, Chair of the Executive Board of the Jewish Digital Cultural Recovery Project Foundation – which is establishing a central archival database of cultural objects looted by National Socialists and collaborators – reflected on the transformation Germany has undergone since the fall of the Berlin Wall.

Former Rep. Charlie Dent, who served seven terms in the House of Representatives representing the 15th District of Pennsylvania and as Co-Chair of the Congressional Study Group on Germany, presented the 2021 McCloy Award to Mr. Bäte. Upon accepting the award, Mr. Bäte discussed his and his company’s commitment to alleviating climate change and said that “all of us in the private sector have to do what we already did in Paris, we have to lead the way … We [Allianz] want to be a force for good to leaving a better place for our children.”

The dinner featured a special video message from former Secretary of State James A. Baker praising his former colleague Robert B. Zoellick. Ambassador Zoellick, who was awarded the 2021 Transatlantic Leadership Award, said: “I have to remind people that it would be foolish to let these two countries [Germany and the United States] drift apart, and that’s where the American Council on Germany comes in … This organization has worked over the years, including with the critical Young Leaders program, to keep people understanding, at the human level, the importance of the relationship between these countries.”

After the award presentation, both honorees sat down for a fireside chat with Ms. Berger to discuss the legacy of German unification more than 30 years ago – and how transatlantic partners can best tackle the challenges of today and tomorrow.

The ACG is very grateful to those who supported the dinner and helped make it a success. The proceeds provide critical support for the Council’s programs, including policy discussions, conferences, and exchanges like the Young Leaders Conference, fellowships, youth forums, and study groups and study tours.