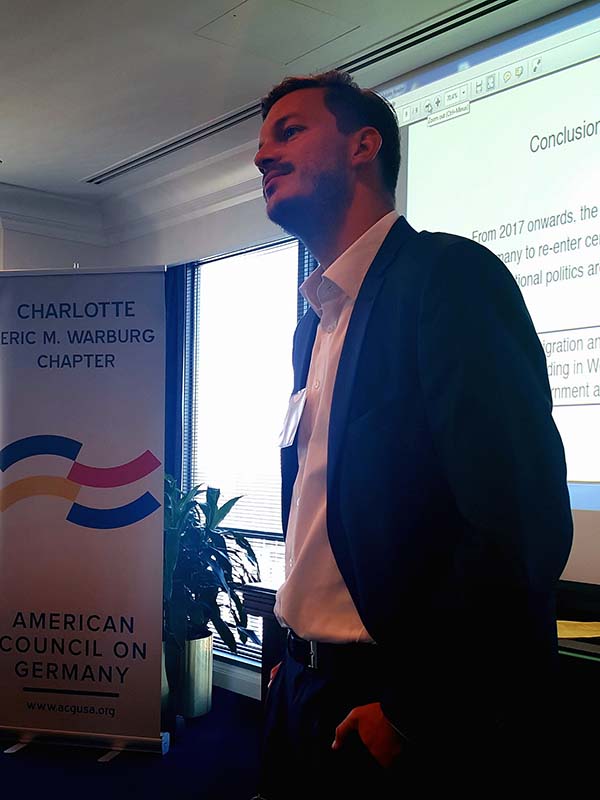 The Charlotte Warburg Chapter was formed in October 2003 and is part of the vibrant German and international community in the region. Home to over 200 German-owned companies, the region boasts one of the highest concentrations of German business in the United States.

The Charlotte Chapter hosts events covering a range of political, social, cultural, economic, and business topics of current interest at breakfast briefings and lunch or evening discussions. The events generally appeal to the German-American business community, academics, and those community members interested in global affairs. The Chapter also partners with local secondary schools and universities to organize events tailored to students and faculty when possible.

Each year, the Charlotte Chapter hosts nearly two dozen different events. Recent speakers have included Annette Schavan, former Federal Minister of Education and Research; Riprand Graf Arco, Founder and Chairman of the American Asset Corporation; Dr. Joyce Mushaben, Professor of Global Studies and Curators’ Professor of Comparative Politics and Gender Policies at the University of Missouri – St. Louis; Helga Barth, Head of Political Affairs at the German Embassy in Washington; Martin Klingst, Senior Political Correspondent with DIE ZEIT; Metin Hakverdi, Member of the German Bundestag (SPD); with Ambassador John Kornblum, former U.S. Ambassador to Germany; Knut Detlefson, Head of the Friedrich-Ebert-Stiftung in Washington, DC; and Ralf Fuecks, Managing Director of the Center for Liberal Modernity and Author of Defending Freedom: How We can Win the Fight for an Open Society.

Speakers covered a variety of topics from German-Russian relations, to the migration crisis, to cyber security, and the EU after the Brexit.

Al Guarnieri has been the Director of the ACG’s Charlotte Chapter since 2007. He is also a Partner at the law firm of Parker Poe Adams & Bernstein LLP, and has extensive experience with international business transactions. He represents U.S. and foreign corporations and individuals on foreign investment and site selection, mergers and acquisitions, and other corporate matters.

Mr. Guarnieri is the past Chairman of the International Committees for the Greater Raleigh Chamber of Commerce and past Chairman of the International Law Section of the North Carolina Bar Association. He is the Membership Director for the North Carolina Chapter of the German-American Chamber of Commerce and serves on various boards.