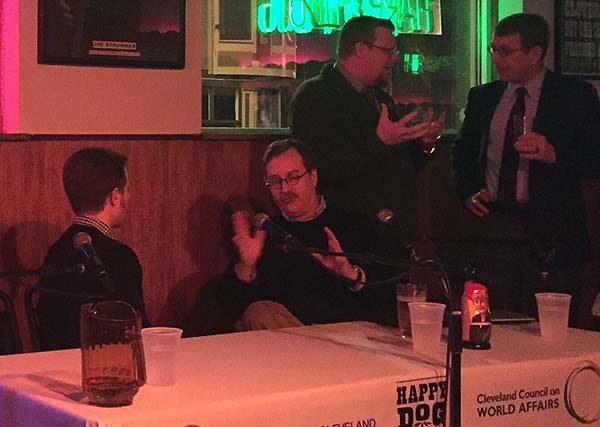 Speakers who have visited the Cleveland Chapter include Klaus Dieter Frankenberger, Journalist and former Foreign Editor of the Frankfurter Allgemeine Zeitung, Prof. James D. Bindenagel, Senior Non-Resident Transatlantic Fellow at the German Marshall Fund; and Anja Wehler-Schoeck, President of the Amman Office of the German Friedrich-Ebert-Stiftung.  Speakers have discussed topics such as the future of the EU, Germany’s growing leadership role in Europe, migration, and the rise of right-wing extremism.

Martin Schulz leads PNC Capital Advisors LLC’s international equity team and helps manage over $40B in assets under management. He is a member of the firm’s leadership team and a long-standing member of the asset allocation committee. His international growth investing philosophy utilizes a unique top-down country allocation framework and his PNC International Equity Fund is a five star Morningstar rated fund. He manages international assets for the firm’s institutional clients and is regularly quoted in industry print and electronic publications.

Mr. Schulz has more than 20 years of investment management experience with positions in both equity research and portfolio management. Prior to joining PNC in 1998, he was a portfolio manager with National City Corporation. Conversant in French and fluent in German, Mr. Schulz conducts meetings and calls with company management and policymakers around the globe. He has traveled to more than 75 countries.

Mr. Schulz earned his undergraduate degree in international relations and German studies from Cornell University, magna cum laude and has both an MBA in international business and a J.D. from George Washington University in Washington, D.C. More recently, he received a master’s degree in strategic studies from the U.S. Army War College in Carlisle, PA. He has served in the U.S. Army for over thirty years attaining the rank of colonel and was honored as the 1999 General MacArthur Junior Officer Leadership award winner. In addition to leading the ACG’s Chapter, Mr. Schulz also serves on the board of the Cleveland Council on World Affairs.