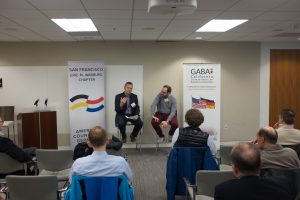 The ACG’s San Francisco Chapter is one of the most active Chapters. The Chapter generally organizes lunch and evening events focused predominately on transatlantic relations and global affairs. The Chapter has a strong constituency in the Bay.

The Chapter partners with other local organizations such as the German Consulate, the German-American Business Association, the German American Chamber of Commerce, Goethe-Institut, the World Affairs Council of Northern California, and the Institute of European Studies IES at UC Berkeley.