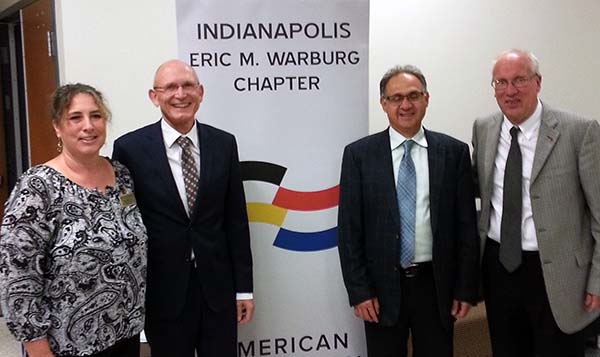 The Indianapolis Warburg Chapter has been engaging the community for over a decade. The Chapter works closely with community collaborators such as the International Center of Indianapolis, the Max Kade Center at IUPUI, Indiana University, Butler University, Indianapolis-Cologne Sister City Committee, Foundation for Lutheran Child and Family Services, and Jewish Community Relations Committee. It also works with the German Consulate in Chicago.

Recent speakers at the Indianapolis Warburg Chapter include Holger Mahnicke, Head of Communications and Culture at the German Embassy; James D. Bindenagel, Former U.S. Ambassador and Henry Kissinger Professor for Governance and International Security at the University of Bonn; Tobias David, Chief of Staff to the Lord Mayor of Leipzig; Dr. Cornelia Schu, Managing Director and Director of the Research Unit and Expert Council German Foundations on Integration and Migration (SVR); Dr. Giles Hoyt, Professor Emeritus of the IUPUI Max Kade German-American Research and Resource Center; Prof. Dr. Michael Haspel, Director of the Evangelischen Akadamie Thüringen and Professor for Systematic Theology at the Friedrich-Schiller-Universität in Jena; and Prof. Dr. Norbert Frei, Director of the Center for 20th Century History at the Friedrich-Schiller-Universität in Jena.

The discussions covered a wide range of topics important to the transatlantic partnership including the European refugee crisis and the Syrian war, Germany’s role within NATO, and the future of the EU after the Brexit.

Sven Schumacher is a native of Germany who came to the United States in 1985 on an exchange program with the Indiana University School of Social Work. He holds an MSW degree from Catholic University, an MS degree in marriage and family therapy from Butler University, and a master’s degree in public affairs from IUPUI. He has also fulfilled the requirements for a Certificate in Project Management from IUPUI.