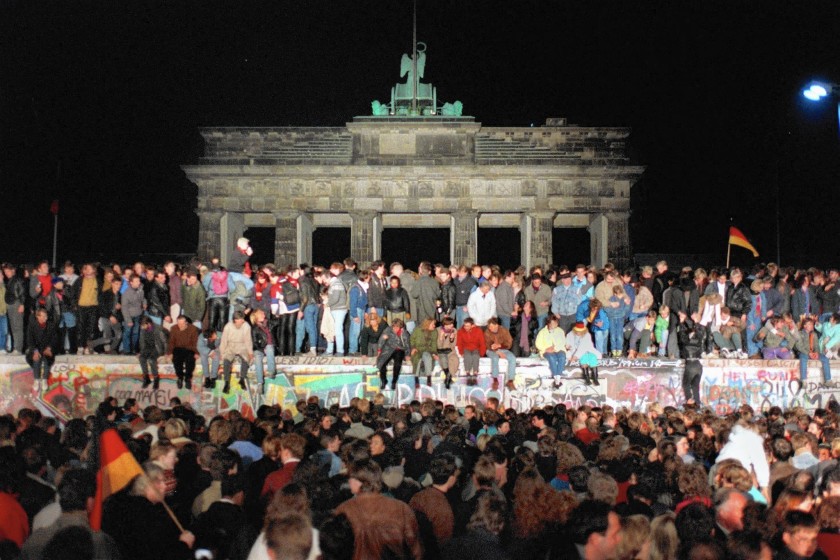 Author’s note: As we all look ahead to the 30th anniversary of the fall of the Wall, I was asked to look at whether there is still a wall in the minds (“Mauer im Kopf”) of former West and East Germans. I was born in West Germany and grew up there after 1989, and I moved to East Germany after high school. Although I have lived on both sides of the former border, it is not my place to explain any differences and divisions that remain. In fact, I think this is one of the main reasons causing problems and frustration – people from West Germany trying to explain former East Germans. Therefore I will draw on recent facts and figures to shed light on the current situation – and what may lie ahead.

In a study this year, the Otto Brenner Stiftung examined whether there is still a psychological wall (“Mauer im Kopf”), especially in the young minds of the so-called “Nachwendegeneration” – people who were born after 1989. The study found that even 30 years after the fall of the Berlin Wall, there is still a wall in the minds of young people, although it is not as high anymore.

I lived in former East Germany for four years. I started in the very progressive and cosmopolitan city of Leipzig and moved for my military service to a little village in Saxony-Anhalt on the border with Brandenburg. After that I started my studies in Potsdam in Brandenburg until I finally arrived in Berlin. From my personal experience I can report that I never witnessed any wall in the minds of young East Germans in big cities like Leipzig or Potsdam as well as little villages in Saxony-Anhalt like Jessen. But even if I did not experience a psychological wall among young people in former East Germany, I did see a big difference between urban and rural areas. The countryside in Saxony-Anhalt or Brandenburg hangs back economically; that is clearly visible. There are very few young people. While I might not have a full picture of East Germany, from what I experienced – especially in the countryside – it is only understandable that studies find that east-west divisions persist.

Four decades of German division have naturally left a mark, even today. There are many studies showing that especially the people in former East Germany have a strong feeling of disadvantage and injustice toward West Germany. Also people from East Germany have a lower opinion of the functioning of democracy. That also applies to the Nachwendegeneration.

Many politicians mention the topic of East and West Germany in their election campaigns in Saxony and Brandenburg. Even young politicians in former East Germany highlight differences. Lilly Blaudszun, for example, is 18 years old and one of the leaders of the “Jusos” – the youth organization of the Social Democratic Party (SPD) – in Mecklenburg-Western Pomerania. She thinks that one cannot speak enough about East and West. Matti Karstedt, a 22-year-old FDP politician, told the magazine “ZEIT Campus” that he wants to talk about East Germany in parliament because it is his homeland and where his roots are.

Socialization also plays a major role in this question. The young generation born after 1989 is, of course, shaped by the experiences of their parents who grew up in the German Democratic Republic. The question “Is there still a wall in the minds?” is often also a question of fairness and unfairness. 51 percent of young western Germans think that the people in East Germany were treated unfairly after unification, while 77 percent of young eastern Germans think so.

When we look at the economic situation in eastern and western Germany, the different socialization, and many other factors, we can see that there is still a wall in the minds of young Germans, even Germans of the Nachwendegeneration. The Otto Brenner Stiftung found that only one third of eastern Germans who are between 18 and 30 years old today believe that it makes no difference whether they come from former East or West Germany.

These reasons have helped lead to a strong Alternative für Deutschland (AfD) party in former East Germany. Even if I am of the opinion that people in eastern Germany are not much more prone to voting for the far right than people in western Germany, the question comes up: Why is the AfD so strong in East Germany? In the last European election, earlier this year, the AfD became the strongest party in Brandenburg and Saxony. Even in Saxony-Anhalt and Mecklenburg-Western Pomerania the AfD took second place. This is no coincidence when we consider the above reasons, like the economic situation and the feelings of being treated unfairly. It is understandable that people look for something new, for an alternative.

But the good news is that overall the Nachwendegeneration in former West and East Germany looks ahead confidently. In Saxony and many other East German states, the majority of young people voted against the AfD. There are promising signs that the wall in German minds will disappear in the future – and the hope for that development is even greater.

Elia Panskus is Speaker for Press and Public Relations for Bundestag Member Ekin Deligöz (Greens). In August, he completed the ACG’s 2019 Carl Duisberg Fellowship for Future German Transatlanticists, during which he conducted research on the influence of social media on politics.

Posted on September 4, 2019 by Robin Cammarota in News0 comments