Economic Inequality After The Pandemic 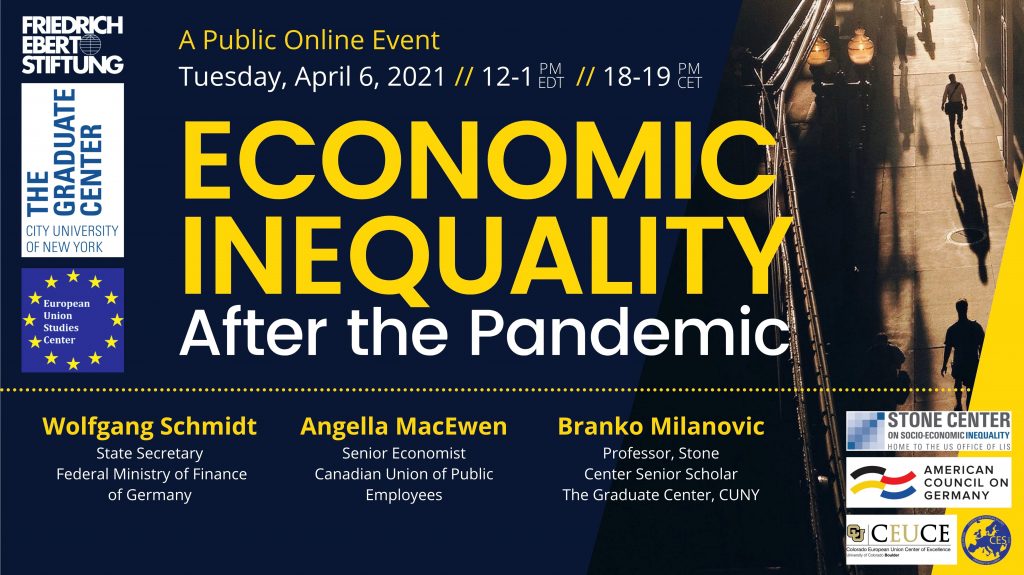 A discussion of inequalities revealed and exacerbated by the COVID-19 pandemic, the public policy tools available to ameliorate them, and the likely paths economies will take in recovery.

Wolfgang Schmidt was appointed State Secretary at the German Federal Ministry of Finance in March 2018. Prior to that, he served as State Secretary of the Free and Hanseatic City of Hamburg for seven years, and he was a member of the European Committee of Regions (2015 to 2018). During his career, Mr. Schmidt also served as Director of the Office of the International Labor Organization (ILO) in Germany. From 2007 to 2009, he was Chief of Staff of the German Federal Minister for Labor and Social Affairs and Head of the Policy and Planning Unit. He has been a member of the Social Democratic Party (SPD) since 1989 and also served as Chief of Staff to the SPD’s Secretary-General. He studied Law in Hamburg and Bilbao/Spain.

Angella MacEwen is the Senior Economist at the Canadian Union of Public Employees (CUPE), and a Policy Fellow with the Broadbent Institute. Her primary research focus is understanding the Canadian labor market, broader economic trends, and the impacts of social policy on workers. Ms. MacEwen regularly represents the CUPE at parliamentary committees and in the national media. She has been a Research Associate with the Canadian Centre for Policy Alternatives since 2006 and contributes to the annual Alternative Federal Budget. She is on the steering committee of the Progressive Economics Forum, as well as the Trade Justice Network. Ms. MacEwen holds an MA in Economics (Dalhousie University) and a BA in International Development Studies (Saint Mary’s University).

Branko Milanovic is a Senior Scholar at the Stone Center on Socio-economic Inequality. He served as lead economist in the World Bank’s Research Department for almost 20 years, leaving to write his book on global income inequality, Worlds Apart (2005). Prof. Milanovic was a senior associate at the Carnegie Endowment for International Peace in Washington (2003-2005) and has held teaching appointments at the University of Maryland (2007-2013) and at the Paul H. Nitze School of Advanced International Studies at Johns Hopkins University (1997-2007). He was a visiting scholar at All Souls College in Oxford, and Universidad Carlos III in Madrid (2010-11).

Professor Milanovic’s main area of work is income inequality, in individual countries and globally, including in preindustrial societies. He has published articles in Economic Journal, Review of Economics and Statistics, Journal of Economic Literature, Journal of Development Economics, and Journal of Political Philosophy, among others. His book The Haves and the Have-nots (2011) was selected by The Globalist as the 2011 Book of the Year. Global Inequality (2016) was awarded the Bruno Kreisky Prize for the best political book of 2016 and the Hans Matthöfer Prize in 2018, and was translated into 16 languages. It addresses the economic and political effects of globalization and introduces the concept of successive “Kuznets waves” of inequality. In March 2018, Prof. Milanovic was awarded (jointly with Mariana Mazzucato) the 2018 Leontief Prize for Advancing the Frontiers of Economic Knowledge. His new book Capitalism, Alone was published in September 2019. Professor Milanovic obtained his Ph.D. in economics (1987) from the University of Belgrade with a dissertation on income inequality in Yugoslavia.