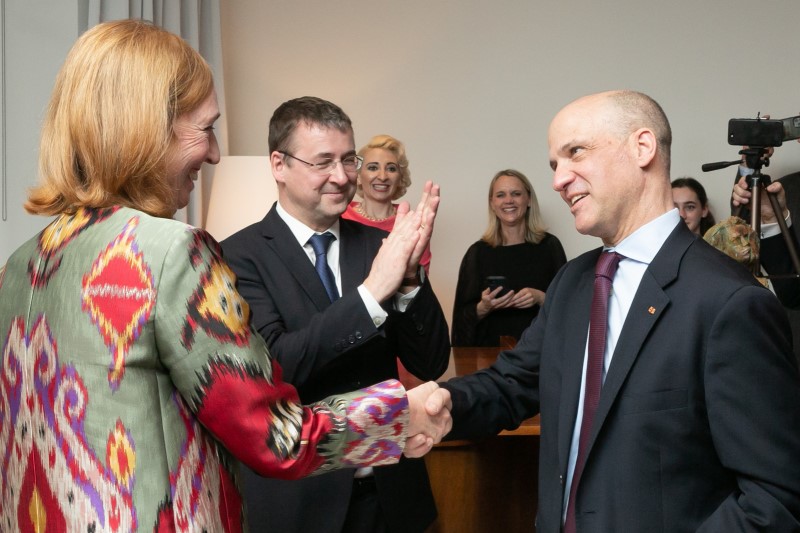 On Monday, March 7, German Ambassador to the United States Emily M. Haber presented ACG President Dr. Steven E. Sokol with the Cross of the Order of Merit of the Federal Republic of Germany (Bundesverdienstkreuz) at the Residence of German Consul General David Gill (1992 Young Leader) in New York. All of us at the American Council on Germany are extending heartfelt congratulations on this high honor.

Ambassador Haber praised Steve Sokol for going above and beyond to build connections across cultures and backgrounds, not only in his current capacity but also in his prior positions as President and CEO of the World Affairs Council of Pittsburgh, Deputy Director of the Aspen Institute Berlin, and a Program Officer in the Berlin office of the German Marshall Fund of the United States.

Those fortunate to know Steve Sokol know him to be a consummate transatlanticist whose passion for creating connections transcends any manner of the border. His career has been rooted in – and devoted to – Germany and the United States, and he knows both countries inside and out. His decades of work promoting international understanding have helped shape hundreds of future leaders, opened the minds of thousands of budding transatlanticists, and forged countless lines of communication. And if you ask him, he is just getting started.

The future of the transatlantic partnership is all the brighter thanks to the indefatigable efforts of Steve Sokol. Herzlichen Glückwunsch Steve!

Posted on March 10, 2022 by Robin Cammarota in News0 comments