The ACG holds regular events in Washington, DC, in an effort to keep Young Leader alumni and ACG members in the region engaged in transatlantic dialogue.

“The Future of U.S.-European (Economic) Relations”
The ACG hosted a Young Leader Alumni event in Washington, DC on April 23, 2019 with Philipp Steinberg, Director General for Economic Policy for the German Federal Ministry for Economic Affairs and Energy. Nearly 50 alumni from the past 30 years attended the discussion and reception on the future of economic relations between the United States and Germany.

On March 29, 2018, nearly 40 Washington-area Young Leader alumni and several guests gathered for a discussion with CDU Bundestag member Peter Beyer, a longtime friend of the ACG who works in the Bundestag’s Committee on Foreign Affairs. The group participated in a wide-ranging discussion on trade, NATO, cybersecurity, the newly formed German government, and current relations with the U.S. government. The ACG is grateful to corporate member Volkswagen for hosting this Breakfast Briefing, and to Board member David Geanacopoulos for moderating the program.

“A Misaligned Alliance? How Germans and Americans Think about Today’s Common Global Challenge”
In late February and early March of 2018, the ACG collaborated on two back-to-back panel discussions with the Pew Research Center and the Körber Stiftung, to present the findings of opinion surveys by Pew and Körber regarding the state of the German-American relationship. The Pew and Körber studies may be accessed at www.pewresearch.org and www.theberlinpulse.org.

The first of the two panels took place in Washington, DC, on February 28 and was moderated by ACG President Dr. Steven E. Sokol. The panelists were Boris Ruge, Deputy Chief of Mission at the German Embassy; Wendy R. Sherman, Senior Counselor at the Albright Stonebridge Group and former Undersecretary of State for Political Affairs at the U.S. State Department; and Christoph von Marschall (1999 Kellen Fellow), Chief Diplomatic Correspondent at Der Tagesspiegel and 2017 Helmut Schmidt Fellow at the German Marshall Fund of the United States.

“The Transatlantic Partnership in an Age of Terrorism and Tectonic Shifts” 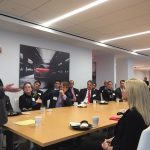 On Tuesday, January 31, 2017, General Michael V. Hayden, former head of the NSA and former CIA Director who served in the Clinton, Bush and Obama administrations, offered his candid perspectives on global challenges and the first days of the Trump Administration to a group of ACG Young Leader alumni at Volkswagen’s Washington office. General Hayden began by describing the tectonic shifts that have “melted” the post-World War II order. He described the kind of role countries like China, Russia, and the United States play today. General Hayden said that the new Administration seems to regard immigration and free trade as threats rather than opportunities and that it will approach alliances in a very transactional and tactical manner.  He expects to see continuity in foreign policy from Obama to Trump and expressed confidence in President Trump’s Cabinet choices. But, he wonders whether the White House will listen to them in the days and months ahead…

“In Defense of Globalization”
Leading up the U.S. Presidential election, Handelsblatt established an “Election Camp” in Washington, DC, and hosted a series of policy discussions. On November 1, 2016, the ACG partnered with Handelsblatt to hold a discussion with former ACG Board Member Ambassador Robert Zoellick, former President of the World Bank and 13th U.S. Trade Representative. He noted the polarization of the United States on trade agreements and gave a passionate defense of globalization.

On May 23, the ACG partnered with the German Marshall Fund of the United States, AICGS, the Transatlantic Academy, the BMW Center for German and European Studies, and the Transatlantic Center to hold a panel discussion on the life and legacy of former Foreign Minster Hans-Dietrich Genscher. ACG Chairman Ambassador Robert M. Kimmitt and Ambassador Wolfgang Ischinger (1978 Young Leader), Chairman of the Munich Security Conference, together with moderator Dr. Hope M. Harrison (2003 Young Leader), Associate Professor of History and International Affairs at George Washington University’s Elliott School of International Affairs, discussed the critical role Minister Genscher played in the unification of Germany in 1989 and 1990. Both Ambassador Ischinger and Ambassador Kimmitt spoke of the high level of trust that Genscher was able to build with each of the people involved in the Two-Plus-Four agreement. Ambassador Ischinger said that “Trust is the currency of diplomacy,” and that Genscher went to great lengths to establish the trust that was quintessential to reach the final agreement.

On May 18, the German Federal Minister of the Interior, Thomas de Maiziere (1989 Young Leader), made a point of meeting with a group of nearly 80 Young Leader alumni and other special guests to discuss immigration, terrorism, and counterterrorism in the Capitol in Washington, DC. He was introduced by 2009 Young Leader Congressman Joaquin Castro (Texas-D). In his remarks, Minister de Maiziere said Europe and especially Germany are facing significant humanitarian and security policy challenges. Homing in on Europe’s refugee crisis, he said the migration of people is nothing new, but the volume of migrants and the speed and reason for their movement makes the challenge of managing migration that much more complex. He cited the threat posed by ISIL as a catalyst for the waves of migration. He said that no single country can tackle the challenges of migration or terrorism alone.

“Helmut Schmidt: The Life and Legacy of a German Statesman”
On January 12, 2016, the ACG partnered with a number of other German-American organizations to host a panel discussion celebrating the life and legacy of Helmut Schmidt in Washington, DC. The panel included ACG Board member Dr. Henry A. Kissinger and two of Chancellor Schmidt’s former colleagues at Die Zeit, Dr. Theo Sommer and Dr. Constanze Stelzenmueller. They shared personal insights and offered their views on his legacy. The event may be viewed here.